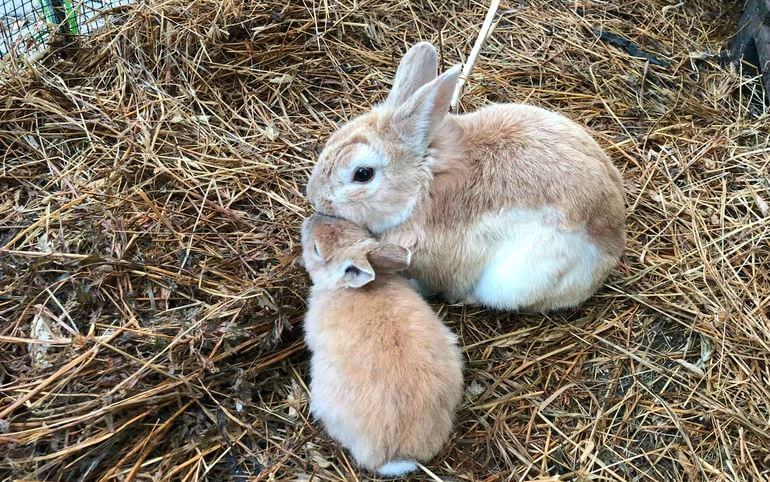 Unlike horses and cattle, rabbits eat just a small amount of hay daily. However, hay owners have specific amounts of hay sold at once and can’t give you small amounts to be consumed by your bunny once. As a rabbit owner in such a situation, you’ll wonder how to store the extra hay so it doesn’t get moldy. Luckily, I’m here to show you inexpensive hay storage ideas for rabbits. You can easily implement these ideas in the comfort of your home.

The following are inexpensive hay storage ideas for rabbits:

In this article, I’ll go over the above hay storage ideas for rabbits in detail. I want to enlighten you on how to practice each concept, including the materials needed. So, keep reading to get informed.

If you only have rabbits but no horses or cattle that need a lot of hay, chances are you don’t have a barn. In this case, you need to know how to store hay without a barn in small quantities. The following inexpensive hay storage ideas will come in handy:

Wood pallets make great storage for hay because they’re cheap, sturdy, and easy to find. You can often get them free from businesses that receive shipments on pallets.

You need the following materials to store rabbits hay on wood pallets:

Expert Tip: Ensure the location you choose to store your bunny’s hay is dry. According to PennState Extension, hay becomes moldy when exposed to moisture exceeding 14 to 15%. Moldy hay is toxic for rabbits health as it predisposes them to:

If you notice any of the above infections, take your bunny to the vet immediately.

Storing Hay in a Dry Environment Free of Pests

Dry places are crucial for hay storage because, as mentioned earlier, mold forms when hay is exposed to excessive moisture.

You also need to ensure the environment is free of pests because they can contaminate the hay and cause your rabbit to get sick. Some of the pests that love feasting on hay are:

The following practices will help you make the environment dry and free of pets:

In most cases, rabbits eat approximately 13 ounces of hay weekly for every 2 to 3 pounds of body weight. In such a situation, if you have more than ten hay bales, they can get spoilt before your rabbit consumes them all.

A small palleted hay shed will be essential if you have such an amount of bunny hay bales. The shed is an excellent way to store hay outdoors and will protect it from moisture and pests.

Here’s how to make a small palleted hay shed:

You need the following materials:

It’s worth noting that the shed should remain closed, especially in winter, to prevent snow from making the hay wet.

If you have an old dresser drawer, you can use it to store hay bales. The advantage of using a dresser drawer is that it’s already elevated off the ground, making it difficult for pests to access the hay.

Furthermore, a dresser drawer is closed, so your hay will be in the dark. It’s advisable to store your bunny’s hay in a dark area. Storing hay in the dark prevents it from being bleached by the sun, making it lose nutrients.

You can also put a mesh on the opening of the drawer to keep pests out while still allowing air to circulate.

Without question, bins make an excellent inexpensive way to store hay. They’re big enough to store rabbit hay but small enough to be placed in a corner or closet.

You can find rectangular storage bins made of different materials such as:

The good thing with a rectangular storage plastic bin is that you can decorate it in any way. For instance, you can make the bin a seat after storing your bunny’s hay inside.

Ventilation is crucial when storing your rabbit’s hay in a storage bin. Remember, hay needs free circulation of air to stay clear of moisture-locking. Thus, making some holes around the bin is relevant to allow for free air circulation.

Not any type of hay will be suitable for your bunny friend. You want hay that will enhance your rabbit’s health. For this reason, you should consider the following factors when buying rabbit hay:

Rabbits should have access to quality fresh hay all day as this is the best way they get nutrients like proteins, roughage, and calcium. However, it’s worth noting that a diet of hay alone will not give your bunny all the nutrients she needs. Thus, you should supplement the hay with other foods like fresh veggies and leafy greens.

How long can you keep hay for rabbits?

You can keep hay for rabbits for up to 6 months. However, this is achievable only if the hay is appropriately stored in a dry, dark, and well-ventilated environment.

Do rabbits need hay at night?

Rabbits need hay anytime, including at night. Hay is an excellent rabbit food that replenishes their nutrients.

Safe hay storage for rabbits is essential to prevent mold. Feeding your bunny friend eating hay that’s moldy exposes him to the risks of gastrointestinal upset.

I hope the above hay storage ideas for rabbits will help you keep your bunny’s hay fresh for his safety.