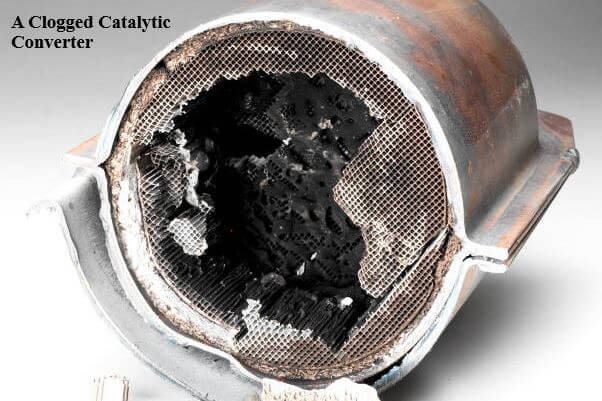 If you are driving and suddenly notice your car is losing power, the first thing to check is your catalytic converter. Catalytic converters help cars run efficiently by converting harmful gases like nitrogen oxide (NO) into less-harmful carbon dioxide (CO2). They also reduce engine emissions that cause smog. In this article, we want to fully answer the question, “Will a clogged catalytic converter cause loss of power?”

Yes, a clogged catalytic converter will cause loss of power to your car. A catalytic converter works by converting harmful gases like nitrogen oxide (NO) into less harmful carbon dioxide (CO). If it is clogged, your car will not be able to run efficiently because of insufficient oxygen in the exhaust for adequate combustion. This would result in lower RPMs compared to normal driving conditions.

Reasons why a Clogged Catalytic Converter will cause Loss of Power

Engines with significant soot or unburnt fuel in the exhaust may not be able to start or run. It may have difficulty accelerating or climbing hills. Moreover, the car might lose speed on flat surfaces when you’re trying to maintain highway speeds.

The catalytic converter is crucial for your car’s emission control systems. This means that if it breaks down, there will no longer be an efficient way to control the engine’s emissions. Any unburned fuel will be emitted directly into the environment. In turn, this affects your car’s performance and cause loss of power by causing carbon buildup.

Check out: How to Use Catalytic Converter Cleaner

Clogging of the Honeycomb Layer

A clogged honeycomb layer is one of the biggest things that can cause a loss of power. In this case, your car will feel as though it’s not getting enough air to fuel the mixture for optimal combustion and performance. Therefore, you’ll be losing horsepower at an accelerating rate because there won’t be any way to increase airflow through the catalytic converter.

The clogging of the car’s honeycomb layer is attributed to the fact that soot and unburnt oil do not allow the catalyst to heat to the operating temperature. As a result, the honeycomb layer experiences mechanical wear, short trip driving, and poor fuel consumption which in turn leads to the loss of power.

A clogged catalytic converter causes the exhaust gases to back up in the exhaust system. What this means is that the gases will not be flowing out as initially designed. The impact of this is a resistance on the exhaust stroke which in turn leads to poor intake as the space is taken up by unexpected exhaust gases. As a result, your car will lose power.

The dislodging of the Catalyst

The catalytic converter is designed to break down the dangerous gases in your car’s exhaust. Sometimes, though, the catalyst can dislodge and get stuck somewhere in between the engine valves. Some causes of this include excessive vibration, excess heat, and temperature change.

The moment the honeycomb faces the wrong direction with the openings parallel with the exhaust pipe, it clogs the airway. As a result, this causes a loss of power when you step on the gas pedal. With such a situation, your car will not be able to go faster than 50 mph even on full throttle.

Melting of the Catalyst

A catalytic converter works by transforming harmful pollutants in your car’s exhaust into less dangerous gases. When the temperature of the catalyst rises, it melts and becomes a part of the toxic gas that is released into our atmosphere. This can cause serious damage not only for you but also for everyone else on the road! A melted honeycomb on the other hand will reduce the power with which your car accelerates as it impairs the operation of the entire catalytic converter.

How to check exhaust restriction

You can find out if your catalytic converter is clogged by checking for an exhaust restriction. To do this, you would need to place the car in neutral gear and rev up to about 3,500 RPM. If there is a significant drop in RPMs compared to the normal driving conditions then it shows that the catalyst has been restricted due to foreign particles.

Another way to check for an exhaust restriction is by holding up a lighter or matchstick in front of the catalytic converter when the car is running in neutral gear with its throttle open. If there are any obstructions then you will see that this flame does not move forward normally but instead, it flickers back and forth due to lack of air supply. If the catalytic converter is clogged, it can lead to reduced engine power output with a corresponding loss of fuel economy.

Symptoms of a clogged catalytic converter

A clogged catalytic converter can lead to reduced engine power output with a corresponding loss of fuel economy. There are many reasons why a catalytic converter might become clogged. For instance, the converter can become clogged if there is an excessive buildup of carbon in the engine’s combustion chamber. The same goes for poor fuel quality, which might cause deposits to form inside the cylinders and on other critical components.

When gasoline burns, it creates a byproduct called sulfur dioxide (SO), which finds its way into emissions that are released through the tailpipe. This, in turn, creates sulfuric acid when combined with water and oxygen from the air. Debris can clog up a converter if it gets sucked into an engine’s intake and is burnt along with gasoline during combustion. Even dirt or dust particles that get into the catalytic converter can cause problems for it over time. You should understand that all these issues leading to a clogged catalytic converter eventually makes your car lose power.