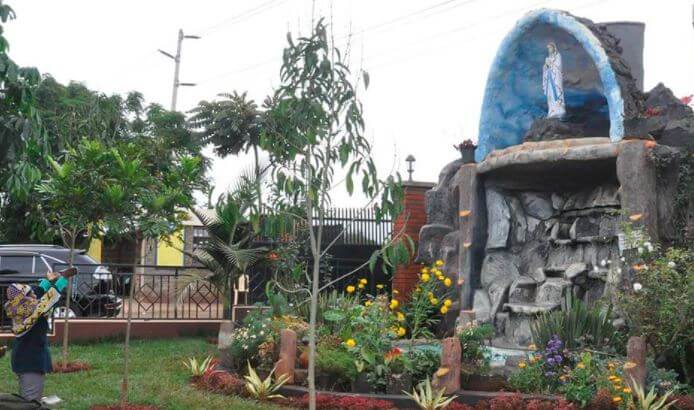 In today’s world, people are looking for a quiet and ambient place to reconnect with God and humanity.  Or a place to rest in God’s presence for spiritual direction, workshops, seminars, and individual guided retreats.   If you are drawn to a place of silence and tranquility to deepen with God, here is a list of the seven catholic retreat centers in Kenya where you can visit and have a moment of prayer and reconnection with God.

Tigoni study center is one of the largest catholic retreat centers in Kenya. It provides ongoing spiritual formations to people from all over. The center’s main aim is spiritual formation, and it offers different activities carried out throughout the year:

This is among the renowned catholic retreat centers in Kenya. The Vincentian retreat center is located in Thika, nearby to the Nairobi-Thika Highway. It’s set on land donated by a wealthy man named John Thuo. The foundation of the retreat was laid by Rev. Fr. Varghese Parappuram, the superior general of the Vincentian Congregation, on 19th March 2011.

It has a retreat hall that can hold up to 6500 people. The residential retreat was started in 2013. Vincentian is the only retreat in Kenya that can hold 1400 residential retreatants. On the 4th of April 2014, the retreat made a historic day for the Vincentian ministries in Kenya as the president of Kenya H.E Uhuru Kenyatta visited the retreat center and approved their missionary work of evangelization in Kenya.

The President commenced the second phase of their hall, which was blessed by Rev Fr. Varghese Parappuram, the superior general of the Vincentians. The center conducts a residential retreat twice a month, and people from all over support it.

Find Out: The 5 Best Religious Retreat Centers in Nakuru City

Mwangaza Jesuit Spirituality Centre was established as a prayer house in 1979. Its main aim is to facilitate Ignatian spirituality and boosts the personal spiritual growth of people seeking the will of God in their life.

The retreat concentrates on information courses and directed retreats programs founded on Ignatian spirituality. Their aim is to help people discern the living God active and present in their lives.

The retreat networks with the Christian life Community and ZAIDI Center. The two groups share Ignatian spirituality and Jesuit mission in Africa. They are primarily concerned with civil society and the Catholic Church’s empowerment of the people.

Located in a tranquil place, the retreat offers direct complement and guidance in prayer. Currently, Mwangaza can hold up to 55 visitors. It has five full-time retreat attendants(4 Jesuits and one religious sister) and eighteen support staff. In addition, the center has a few part-time Jesuits and ten part-time external competent retreat guides.

The retreatants have access to the three chapels set in the compound. They also benefit from two smaller conferences which can hold up to 20 guests, and a 55- person capacity hall.  Over 2km of footpaths allow retreatants to stroll, relax and pray in the magnificence of nature.

Subiaco retreat center was founded in 1975 to provide a sacred space to groups and individuals for spiritual nourishment.  It’s owned and succeeded by the Benedictine sisters, Nairobi priory.

Subiaco retreat center is equipped with modern-day conferencing amenities, self-contained rooms, and a botanic garden. The center also has a cyber shop and WIFI connectivity in all rooms. Impelled with love, the Benedictine sisters share their spirituality and hospitality with children of God as they give their best at Subiaco Retreat Center.

Rt. Rev James Maria Wainaina, the founder, was enthused to start a center where priests could live to incorporate their emotional, physical, and spiritual lives with their Apostolate. The center was opened in 2013 with help from goodwill people and the diocese.

The center has expanded to be a haven of truce, serenity, and a center for personal growth and rebirth for priests and people looking for a serene place to spend quality time with themselves.

Ukarimu center is a ministry of the Charity of Incarnate Word sisters in Kenya. The founding sister envisioned it as a “living house of prayer among the people. Since mid-1980, it has welcomed religious men and women and priests to come for days of prayers, retreats, and workshops.

It has grown to welcome all faiths who desire to strengthen their relationship with God and others.  Ukarimu Centre is an Oasis of serene and peace located in the Baraka Hills in the Rift Valley Region.

Ukarimu center has 40 rooms, all with private bathrooms. Most of the rooms have beds in the event of more extensive seminars and workshops groups. There are two conference rooms, two chapels, two small meeting rooms, three sitting rooms, and a spacious dining room overlooking the gardens.

St. Bakhita center is a congregation of the Sisters of Charity of the Incarnate Word from Houston, Texas. It was founded in 2017 along Nairobi’s Murishu Road. The center has a quiet, serene atmosphere that invites reflection, prayer, and learning. It’s perfect for seminars, retreats, and workshops like church gatherings and team building.

The center is one of the ambient catholic retreat centers in Kenya equipped with:

Visiting here you will be given a word of encouragement in your faith-filled seeking and leave with help to continue growing in practices that promote the integration of your faith and life.  St Bakhita exists to offer the gift of solitude to help people learn to listen to the voice of God with their hearts.

Sometimes, all you need is a moment of silence to find peace and reconnect with God. Catholic retreat centers in Kenya are known to be better for anyone seeking the presence of God in their lives. Here, we’ve provided you with several catholic retreat centers you can visit if you feel drawn to a place of silence and tranquility to strengthen your relationship with God.