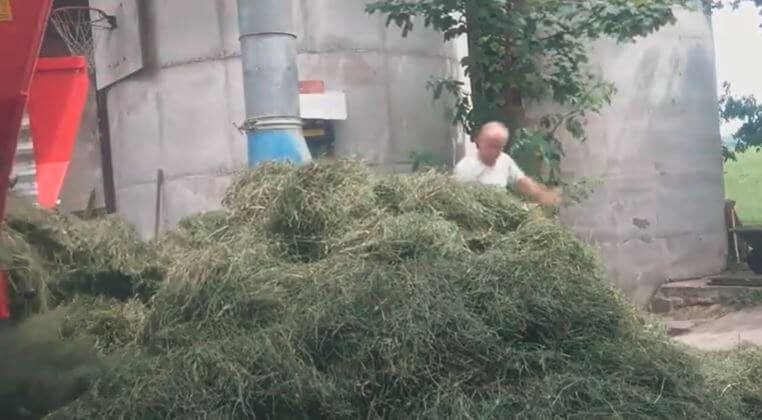 Hay productions costs between $55 to $85 per acre. After all that investment, you don’t want even a third of your hay to go to waste. Good storage methods can help reduce those losses and keep your hay in good condition until you need it. For this reason, you may be asking yourself, “How do you store loose hay?”

You can store loose hay in the following ways:

In this article, I’ll be answering the question, “How do you store loose hay?” You’ll know how to store your loose hay using the above tips. You’ll have a viable tip for your specific case by the time you finish reading.

How to Store Loose Hay

Storing loose hay can be challenging due to its fragility. If not stored correctly, it can spoil quickly and become moldy. You can store your loose hay safely in the following ways:

A hayloft is a great storage option for loose hay. You can only store bulk hay in a hayloft but not large round bales.

The benefit of a hayloft is that it protects hay from the elements and keep it dry. However, you must ensure the hayloft is well-ventilated to prevent mold growth.

Related: How to Keep Hay From Molding

How to Store Loose Hay in a Hayloft

Storing hay in a hayloft can be challenging if you don’t know how to go about it. Luckily for you, here is the procedure:

One of the most important aspects of storing loose hay is making sure it has the right moisture content. If the hay is too wet, it will spoil quickly and become mold. You don’t want to feed your animals moldy hay as this exposes them to digestive and respiratory issues like colic and hives.

The right moisture to store hay is between 18 to 22 percent. You can test the moisture content of your hay using a hay moisture tester.

To get an accurate reading, take multiple samples from different bales and average them out. If the average is above 22 percent, you need to dry the hay further before storing it.

Gravel provides an excellent foundation for storing loose hay. It’s a good idea to store your hay on gravel if you live in an area with high rainfall. The gravel will help drainage and prevent the hay from getting wet.

How to Store Loose Hay on Gravel

Storing loose hay on gravel is easy as long as you follow these steps:

Keep the Hay Away from Moisture

Moisture, either from rain, snow, or ground is the primary cause of hay molding in the United States. Keeping hay, especially if it’s loose from contact with moisture can be a daunting task. However, the following approaches will help you ensure your loose hay is free from moisture:

Storing Loose Hay in a Shed

A hay shed is an excellent storage option for loose hay. A shed, being similar to a house, does not have spaces through which the hay can penetrate and get into contact with water.

Moreover, water or snow will not penetrate the shed to affect your hay.

How to Store Loose Hay in a Shed

If you want to store your loose hay in a shed, follow these steps:

Raising Loose Hay Off the Ground

You should never store your loose hay on the ground. The ground is a source of moisture, which can cause your hay to spoil quickly. Moreover, keeping hay on the ground exposes it to rodents like rats and other animals that may damage it.

The best way to store loose hay is by raising it off the ground. You can achieve this by building a foundation for the hay using wood or concrete blocks.

Alternatively, you can use wood pallets to store loose hay in the following ways:

Proper hay storage has several benefits for you and your livestock. Some of these benefits are:

If hay is stored improperly, it will get exposed to moisture which creates a suitable environment for mold. Moldy hay exposes you and your livestock to the following health complications:

Storing hay properly prevents these diseases by keeping it away from moisture.

Improves the Quality of Hay

Low-quality hay can expose your livestock to gastrointestinal issues like bloating and diarrhea. It may also lead to low milk production in dairy animals.

Hay that is properly stored will retain its nutrients. The nutrients are essential for the growth and development of your livestock. If hay is kept in a moist environment, the nutrients will leach out, and the hay will lose its nutritional value.

Apart from the loss of nutrients, dry matter loss occurs when hay is not stored properly. According to a research by the University of Wisconsin-Madison, hay stored at more than 20% moisture is at a greater risk of dry matter losses. This is due to the increased plant activities like respiration. Moreover, hay is more likely to develop in such conditions.

How do you store small amounts of hay?

You can store small amounts of hay in a barn, a hay shed, or on wooden pallets. The key consideration is to ensure the hay is free from moisture.

How do you store loose hay? There are many ways to store hay that’s loose as has been presented in this article. However, the right approach to storing loose hay depends on your location’s climate and the amount of hay you want to store.

If you’re in a wet area, it’s best to raise the hay off the ground using wood or concrete bricks. If you’re storing a large amount of hay, you can use wood pallets. Arrange the pallets so that there is no space between them and cover them with a tarp.

Whatever method you use to store hay, ensure it’s free from moisture to prevent the growth of mold.