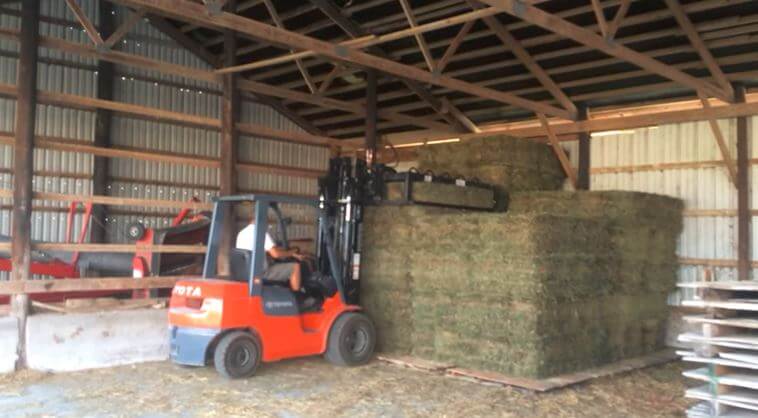 You’re a happy farmer after buying large square bales of hay for your horses. However, your joy is always taken away when you notice that your precious hay is molding. You begin panicking while wondering what you can do to keep your hay from molding. Today, you’ll know how to keep hay from molding using simple DIY tactics.

You can keep hay from molding in the following ways:

In this article, I’ll discuss the above ways to keep hay from molding. After reading the article, you’ll have an appropriate hay preservation approach for your specific case. Keep reading.

How to Keep Hay From Molding

The following are nine easy ways to keep your hay from molding:

Protecting the Hay From Ground Moisture

Ground moisture is one of the leading causes of hay molding in the United States. Moisture emanating from the ground raises the moisture content in the hay above the recommended 14% to 15%. This creates a conducive environment for molds to grow and thrive in the hay bales.

Keeping your hay off the ground is the first way to protect it from soaking ground moisture.

The following are ways to keep your hay off the ground and prevent it from molding:

Elevating the Hay on Racks

Racks are an excellent way to keep your hay off the ground and protect it from mold. You can build a hay rack using lumber or buy one from a farm supply store.

Elevating the Hay on Pallets

Pallets ensure your hay will not touch the ground. You can find pallets at construction sites and warehouses or make your own if you have wood, hammer, and nails.

A hayloft is an excellent way to keep your hay off the ground and dry. However, this approach requires enough space and resources. You’ll need the following to build a hayloft:

Building a hayloft from scratch is an expensive and time-consuming process. If you don’t have the time or resources to build one, you can buy a ready-made hayloft from a farm supply store.

You can also keep your hay from the ground by stacking it in mounds. When stacking hay in mounds, make sure to:

Related: How to Identify Moldy Hay

Salt has been used for centuries as a preservative. Our grandparents and great-grandparents used salt to preserve their food, especially meat. The idea behind this approach was that salt is a dehydrating agent that absorbs moisture from the food, keeping it dry. The same applies to keeping hay from molding.

Salting soaks up the moisture in the hay, especially if it’s rained on. This prevents the moisture from seeping into the hay and causing mold.

The amount of salt you use on your hay is a significant concern. You should use enough salt to extract moisture from the hay bale. I use 25kg of salt for every 100 bales of hay, and this has worked well for years.

The following are ways you can salt your hay to prevent it from molding:

Expert Tip: Do not feed your animals salted hay until it has cooled off, in about a week. This will give the salt time to dissipate.

Storing the Hay in the Right Moisture

Hay should only be stored when it attains 14% to 15% moisture content. This is the ideal moisture level for hay. If the hay is too dry, it will be susceptible to fires. If it’s too wet, it will mold.

What if you don’t have a moisture meter?

If you don’t have a moisture meter, you can determine the moisture content of your hay using the following natural approach:

Hay must be protected from the ground and also from the elements. It should be covered to prevent it from getting wet when it rains. The best way to do this is by providing overhead hay protection.

Overhead hay protection approach depends on your location. You should not cover the hay If you’re in the Western parts of the United States to prevent it from overdrying. Some moisture, less than 14% must be left in the hay to keep it fresh.

Microbes in hay use starch and give out heat and carbon dioxide. This means you’re losing energy from the hay forage, making it less palatable. Such a scenario can happen in Western America due to heat waves. Thus, you should not cover your hay in these regions. Alternatively, you can use hay barns or sheds.

You can cover the hay with tarps if you’re in wet areas with excessive rains. The main idea is to protect the hay from getting wet.

A hay shed will serve you better in dry areas. Because covering the hay can increase sweating, a hay shed ensures free air flow needed in dry areas.

The table below shows the approximate recommended moisture levels for different bale sizes:

Stacking hay is an important step in keeping it from molding. If you stack the hay wrong, it will be more susceptible to mold.

Proper hay stacking must ensure free airflow without howling between the round bales and around the haystack.

The following are stacking tips that will help keep your hay fresh:

Ventilation within stored hay enhances drying, which in turn prevents mold and mycotoxins.

You can also use fans to circulate the air within the storage area.

Make sure there are no holes or cracks in the walls of the storage area. These holes will allow moisture and pests to enter the horse hay.

The temperature difference between the outside air and that inside the storage facility is one of the causes of hay sweating. How does hay sweating necessitate the formation of mold?

You can use different materials for insulating the storage facility, such as straw, wood, or metal sheets.

The key to well-cured hay is its baling moisture content. Hay should only be baled at between 18 to 22 percent moisture.

You can determine the baling moisture content of hay by using a hay moisture meter.

The chances of poorly cured hay going bad are very high. Such hay is more susceptible to mold and pests.

You can know if hay is well-cured by:

Storing Hay in a Dry Place

One of the cheap ways to keep hay from molding is to store it in a dry place.

A dry storage area will prevent moisture from condensing on the hay and prevent mold from forming.

You can achieve this by storing the hay in a well-ventilated and dry place.

An excellent example of a dry storage area is a loft. Lofts are usually located above the barn, where there is good air circulation.

Another option is to store the hay in plastic bags. This will prevent moisture from getting to the hay.

Storing Hay in a Plastic Container

If you live in an area with high humidity, storing your hay bales in a plastic container is a good way to keep them from molding. However, this is excellent for only small amounts of hay.

The plastic container wrap will help to keep the hay dry by preventing moisture from getting to it.

The downside of this approach is the lack of ventilation within the hay. You can solve this problem by drilling small holes in the plastic container to allow air to circulate within the hay. This will prevent mold from forming.

Storing Hay Under a Tarp

If you live in an area with high rainfall, storing your hay under a tarp is an excellent way to keep it from molding.

The tarp will act as a barrier between the hay and the rain. This will prevent the hay from getting wet and prevent mold from forming.

Ensure the tarp is big enough to cover all the hay bales. Alternatively, you can use sandbags or rocks to hold down the tarp’s edges.

Hay preservatives prevent microbial growth in the hay. If left to grow, these microbial contributes to heating which causes mold formation.

Hay preservatives are available in powder or liquid form. You can add them to the water used for wetting the hay during baling or spraying them on the hay after baling.

Using anhydrous ammonia is also an effective way to keep hay from molding. However, anhydrous ammonia should only be used on low-protein grass like Timothy hay. Using this approach on high-protein hay like alfalfa hay will result in protein loss.

It’s worth noting that the hay storage area and the method you use determine how much loss you’ll incur.

What is the best way to store hay?

The best way to store hay is by keeping it inside on an elevated platform like wooden pallets. Indoor hay storage ensures it’s safe from elements like rain which can cause molding. Furthermore, hay stored inside is protected from direct sun which can make it overdry.

How do you keep hay from rotting?

You can keep hay from rotting by protecting it from moisture. The best way to protect your hay from moisture is by raising it above the ground using wooden pallets, covering it with tarps, and storing it inside.

Why is my hay mold?

Your hay is mold because you exposed it to moisture. Hay rots when exposed to moisture, either from rain or the ground. Moldy hay is not good for animals.

Hay is an essential asset in any home with rabbits, horses, or cattle. However, the likelihood of hay molding is high if not preserved appropriately. Feeding your animals moldy hay exposes them to respiratory issues like colic in horses.

As a responsible farmer, you should know how to hay from molding. I hope this guide on how to keep hay from molding will help you safeguard your hay and keep your animals healthy.