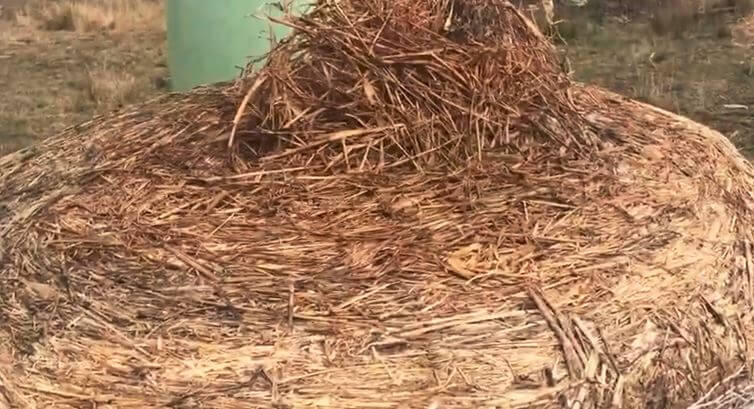 Hay becomes moldy if not stored properly and in the right conditions. As a farmer, you may be tempted to feed your cow moldy hay to reduce wastage. However, you’ll be at crossroads, wondering whether your cow will be safe after consuming moldy hay. The question remains, “Can cows eat moldy hay?”

So, can cows eat moldy hay? No, cows should not eat moldy hay because molds produce mycotoxins. Moreover, mold themselves can also affect the productivity and well-being of cattle by exposing them to gastrointestinal upset.

I’ll discuss why you should not give your cow moldy hay in this article. Moreover, you’ll know the alternative safer feeds for your cow instead of moldy hay. Keep reading to learn how to keep your cows safe.

Reasons You Should Not Give Your Cow Moldy Hay

Although cattle and other ruminants are not more sensitive animals to moldy hay, it’s not advisable to feed it to them. Animals have different digestive systems; what may not be harmful to one species can be toxic to another.

Cows are susceptible to mycotoxins produced by molds growing on hay. Eating bad hay with these toxins exposes your animal to the following risks:

Mycotic abortion is a reproductive problem in cattle caused by certain mold fungi and yeast species. However, the most common species linked to mycotic abortions in cattle are septated fungi (60 to 80% of cases) and Mucor sp.

Mycotic abortions are high during the winter and spring seasons. These are the seasons when cows are highly exposed to moldy hay. It’s worth noting that the primary cause of moldy hay in the United States is the high moisture content typically experienced in winter.

The root of entry of these fungi is the respiratory tract, primarily when the cow interacts with moldy hay. After entering the cow’s body, the fungi penetrate through the blood vessels in the lungs to the placenta, causing placentitis. This condition leads to mycotic abortion, which occurs four months after consumption.

Hypersensitivity pneumonitis is a respiratory allergy in cows that can be caused by the inhalation of moldy hay dust. The cow’s immune system reacts to the inhaled allergen (moldy hay dust), causing an inflammatory response in the lungs.

This condition is also referred to as bovine farmer’s lung or humidifier lung. It can either be acute or chronic, but both can cause death.

Hypersensitivity pneumonitis in cows is characterized by:

Moldy hay is less palatable to cows, so they may not consume enough dry matter. When this happens, the cow’s rumen becomes imbalanced and can no longer perform its functions properly.

A poorly functioning rumen can cause the following problems in cows:

Innocuous forages such as corn silage and alfalfa can cause liver damage when they’re moldy. The mycotoxins present in moldy hay can cause fatty infiltration and necrosis of the liver.

This is a severe problem because the liver is responsible for detoxifying the body, and when it’s damaged, it can no longer perform its functions properly. As a result, the toxins will build up in the body, causing more damage.

If you have moldy hay, it’s best to discard it. However, if you must feed it to your cows, ensure it has less than 500,000 cfu/g of mold spores. Feeding your cattle hay with more than this quantity of mold spores can be catastrophic.

One way to minimize feeding moldy hay is by adding other feeds to the hay. Mixing moldy hay with other feeds means you’ll not give the animal too much hay which may expose the cattle to more mold spores.

Here are safer and healthy alternatives for your cows instead of moldy hay:

Yes, moldy feed will hurt calves due to the presence of mycotoxins. These toxins can cause respiratory and digestive issues like bloating, colic, and hives in calves if ingested.

Moldy hay is bad for pregnant cows because it may contain Aspergillus and Mucor. These fungi can cause mycotic abortion in pregnant cows.

Cows should not eat moldy hay as it can expose them to mycotoxins. These poisonous agents can cause respiratory and digestive problems. Furthermore, they can cause mycotic abortion in pregnant cows. I hope this has answered the question, “Can cows eat moldy hay?”