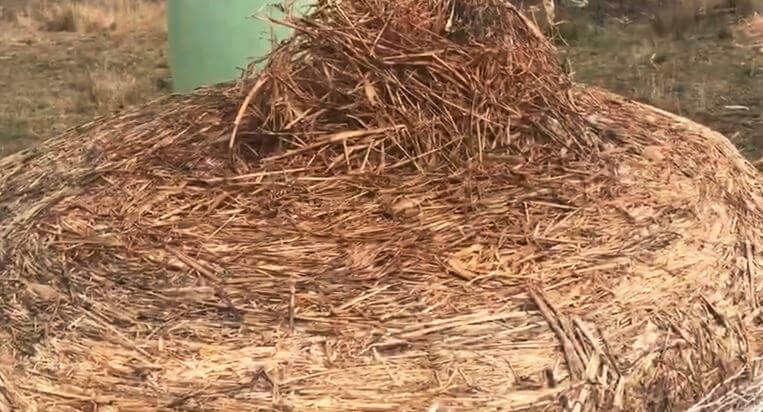 Moldy hay exposes your animals to the risks of respiratory infections like hives and colic. As a loving parent, you don’t want to see your animals suffer from eating moldy hay. Thus, you’ll want a guide on how to identify moldy hay.

The following are the different ways to identify moldy hay:

You can identify moldy hay in the following ways:

Forage laboratories are excellent at testing hay, and other animal feeds if they are fit for consumption.

It’s worth noting that all hay will have some mold. You should not get surprised to learn that your hay has some mold spores when you get to the forage laboratory.

However, the amount of mold is what differs and determines the safe and unsafe hay for animals. The purpose of taking a hay sample to the forage laboratory is to determine if it has an acceptable amount of mold for animals by conducting mold spore counts.

When you take a hay sample to the forage laboratory, the experts conduct a hay analysis to determine hay mold spore count in colony-forming units per gram (cfu/g). The results will show the level of risk your animals face when they consume the hay.

Good quality hay should have less than 500,000 cfu/g mold spores. Your hay is safe for animals if it has been 500,000 to 1 million cfu/g. However, don’t give your animals hay with more than 1 million cfu/g as it exposes them to respiratory infections like hives.

The cost for hay sample testing in a forage laboratory is approximately $40. The process takes about one week.

The forage laboratory will also give you a report on other possible risks like herbicide residues and heavy metal content. An excellent example of a forage laboratory is the Cumberland Valley Analytical Services.

Find Out: How to Store Hay Without a Barn

How to Collect Hay Sample

Collecting hay samples can be challenging if you don’t know the correct procedure. The following is the procedure to collect a hay sample:

The table below shows the risks of feeding your animal hay based on the number of mold spores:

2. Checking the Appearance of the Hay

Moldy hay has a different appearance from fresh, healthy hay. When you look at moldy hay, you’ll notice it’s dried out with a crumbly texture.

The drying of hay is necessitated by the mold growing on it. The mold releases hydrolytic enzymes that break down the carbohydrates and proteins in the hay. This results in the loss of nutrients, water, and energy content in the hay.

3. Heat Emanating from the Hay Bale

When you put your hand on a moldy hay bale, you’ll notice heat emanating from it. Mold growth produces heat due to increased metabolic activities.

Therefore, anytime you go hay shopping, feel every hay bale. In case of excessive heat from the center of the bale, take it as a red flag. At this point, the presence of mold spores does not matter.

4. The Presence of Small Insects

Moldy hay usually has small insects like mites, weevils, and beetles. The insects are attracted to the moldy hay by the smell. The mold growing on the hay also provides a suitable environment for the insects to lay their eggs.

The hatching of the eggs leads to an infestation of small insects in the hay. These insects are a nuisance and dangerous as they can bite and sting your animals.

5. The Presence of Musty Odor

When you open a bale of hay and it has a musty odor, it’s an indication that the hay is moldy. The musty smell is caused by the mold growing on the hay.

The mold releases spores into the air, and these spores have a musty odor. The spores are also dangerous to your animals as they can cause respiratory infections.

If you notice any of these signs, don’t buy the hay. Moldy hay is not only dangerous to your animals but also a fire hazard.

6. Darker Areas that are Grey or Black

Fresh, or rightly preserved hay will be green. If you notice any dark areas that are grey or black, it’s an indication of mold growth.

The mold usually starts growing at the center of the bale and then spreads to the outer parts. This illustrates why it will have darker patches that are either grey or black. A musty smell usually accompanies these patches.

You can confirm this if you open the flakes and inspect the inside. You’ll notice more patches on the inside of the flakes because the mold starts thriving from this point.

7. Excessive Dust in the Hay

Although fresh hay will have some dust, the amount of dust is not too much to qualify such hay as dusty. Mold hay has too much dust, which is a nuisance.

The excessive dust makes breathing difficult when you’re around moldy hay. It’s also dangerous to your animals as it can cause respiratory infections.

Try spreading the hay for some minutes and see how much dust it produces. If the hay is moldy, you’ll notice a lot of dust in the air.

How to Fix Moldy Hay

Fixing moldy hay is not an easy task. Furthermore, you can’t completely fix moldy hay; the only thing you can do is reduce the mold content. Here are some approaches to fix moldy hay:

1. Spreading it in the Open for Sun and Air Exposure

This is one of the most common methods used to fix moldy hay. The sun and air help reduce the moisture content in the hay, which is necessary for mold growth.

You can also use a fan to blow air on the hay while it’s spread in an open area. This will hasten the drying process.

2. Cutting Across the Hay Bale with a Power Saw

Most people use a power saw to cut across the hay bale. This effectively reduces the mold content in the hay by increasing the surface area for air and sun exposure. Cutting across the hay also helps to remove and expose the moldy hay.

You can also use a pitchfork to fluff up the hay and expose more surface area for drying.

How to Keep Hay From Molding

Although you can’t completely stop hay from molding, you can take some measures to prevent it. Here are some of the things you can do:

1. Ensure That the Hay is Completely Dry Before Storing It

One of the primary causes of mold growth in hay is moisture. You should only store hay with less than 22 percent moisture content.

2. Store Hay in a Dry and Well-Ventilated Area

Another way of keeping hay from molding is by storing it in a dry and well-ventilated area. The area should also have enough space for air to circulate.

You can achieve this by storing the hay in an open shed or loft. If you’re using a barn, ensure that the windows and doors are open to allow air circulation.

How do you remove mold from hay?

You can remove mold from hay by cutting across the hay bale and eliminating the moldy part, flash soaking moldy hay in water for about 10 minutes, and opening and spreading the moldy hay in the sun with free air circulation.

Can you get sick from moldy hay?

Yes, you can get sick from moldy hay. Moldy hay is a recipe for Farmer’s Lung, an allergic disease of the lungs.

Identifying moldy hay is essential for the health of your animals. If you can successfully identify moldy hay, the chances of your animals suffering from respiratory infections by being fed moldy hay are limited.

I hope this guide on how to identify moldy hay will help keep your animals safe.