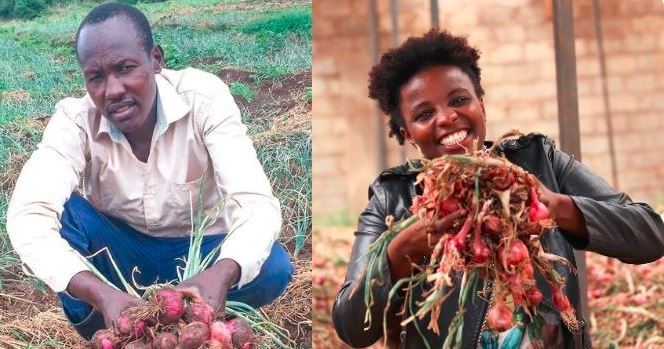 Did you know some farmers make millions of money out of onion farming? Well, if you didn’t know that, you’ll know the successful onion farmers in Kenya today.

The 5 most successful onion farmers in Kenya are:

Agribusiness ideas in Kenya are steadily gaining popularity. Since most people have studied agriculture and several research studies regarding farming are being conducted, young people are encouraged to venture into agriculture to create self-employment.

Onion farming, in particular, is widespread in Kenya and Africa due to its high demand. Onion is a common vegetable in every household. While many people practice onion farming, we’ll look at Kenya’s most successful onion farmers.

Harrison Thiong’o is making over Ksh. 175,000 per season from three-quarter acre after adopting field onion farming. Harrison started tomato and cucumber farming in 2014 in his two greenhouses on a two-acre piece of land in Kayole in Naivasha.

After saving for about three years, he bought a three-quarter acre of land where he now grows onions.  Harrison harvested more than 2 tonnes of onions in his first farming season.

He sells his produce to grocery owners, retailers, and small traders who either visit his farm and buy the produce or place orders to get free deliveries.

To prevent the effect of heavy rain on his onions, Harrison spreads his freshly harvested onion in the greenhouse for the curing process until they are ready for sale.

Related: The Cost of Onion Farming in Kenya; A Breakdown

Gikunda Meme is one of the most successful onion farmers in Kenya.

The farmer was a credited manager at a local bank, but he decided to quit his job in 2003 after a couple of years of employment, arguing that the job wasn’t well paying.

Mr. Meme, who was 50 years then, decided to go into farming. Using his savings and severance pay, a total of 2.7 million, he started growing french beans at a farm located along the Nanyuki-Isiolo highway in Meru county.

The venture didn’t succeed, so he switched to other crops. Today his farming business (Subuiga Hilltop Farm) is 5 acres big and makes him an income of Ksh. 5 million every three months from onions and tomatoes production.

Mr. Meme has subdivided his farm into two portions: in one section, he plants hybrid tomatoes in six greenhouses while growing onions in the open field.

Born and raised in Kisii county, Dan was passionate about farming since he grew up in an agricultural farming society. For nearly five years now, Dan has focused on onion farming and its well paying.

He started farming in Oloitoktok and later moved to Nguu scheme, Makueni County, near Nairobi, where he mainly sells his farm produce. Dan makes approximately Ksh. 450,000 per acre every season.

Peter Marwa has embraced horticulture and makes a high income from onion production. Peter graduated from Kisii University with a Bachelor of Finance and moved to Hola, Tana River county, in 2018 in pursuit of employment.

When he couldn’t acquire a job, Peter opted for farming as there was available land under irrigation. He has since grown horticultural crops like onion, watermelon, and groundnuts.

Peter harvests around 10 tonnes, which gives him around Ksh. 1 million per acre. His farm production cost is about Ksh. 50,000 per acre, including labor, water charges, herbicides, and pesticides. This leaves him with approximately Ksh. 950,000 per acre.

Lucy started the onion agribusiness by experimenting on an eighth of an acre in 2017 and expanded after realizing the crop was well paying. She plants her onions in blocks at different times to ensure she harvests an acre every month. The farm produces 20 tonnes of onions monthly, and she sells each kilo between Ksh. 60 and Ksh. 100.

Lucy Wangari is the face behind Onion Doctor. The passionate entrepreneur is also an agribusiness consultant, an award-winning farmer, Nano-influencer in the digital agribusiness arena, and a content creator.

Lucy is the founder and chief consultant of onion Doctor. The agribusiness consulting firm which works with African farmers to provide specialized onion value chain consultancy, agribusiness solutions, extension, and training services( both online and on-farm).

Onion farming in Kenya is a lucrative investment. However, the profitability is based on good timing, proper labor planning, particularly during transplanting and weeding, proper market identification, and good post-harvesting care.

Onion is one of the staple vegetables worldwide; hence it’s always in demand. Therefore, every aspiring farmer has an opportunity to venture into onion farming with the assurance of making maximum profits, just like the above successful onion farmers in Kenya.