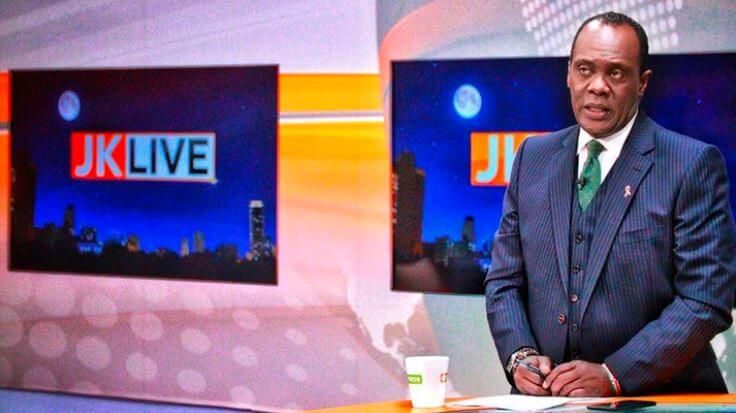 Jeff Koinange is a household name in Kenya’s mass media. Jeff is among the most eloquent media personalities in Kenya. He currently hosts the Jeff Koinange Live (JKL) on Citizen TV. He is among the most experienced journalists having started his career in 1995 at KTN TV. From KTN, he has managed to work with other renowned media houses like CNN and Reuters. His American accent is among the things that drive most people to listen to him especially when he reads the news. We are going to cover Jeff Koinange Biography including his wife, age, career, salary, and education.

Jeff was born on 7 January 1966 in Kiambaa village, Kiambu County. Therefore, he is currently 55 years old. Apart from hosting the JKL show on Citizen TV, he hosts a breakfast show at HOT 96 Radio alongside Nick Odhiambo.

Find out: Uhuru Kenyatta Net Worth, Properties, and Age

Jeff is known to be a great negotiator, a skilled motivator, an excellent showman, and a gifted presenter. This explains why many people in Kenya enjoy his shows; both on Citizen TV and HOT 96 Radio.

He is considered one of the successful reporters originating from Africa. This is based on his excellent reporting skills and keen understanding of his subjects.

He is the first black African journalist to be prominently featured on international network television and at CNN.

Jeff got married to Shaila Koinange in 1998 and together they have one son, Jamal Mbiyu Koinange.

He is related to Uhuru Kenyatta as Mbiyu Koinange was Jomo Kenyatta’s brother-in-law.

Koinange attended St. Mary’s School in Nairobi before proceeding to Kingsborough Community College in Brooklyn, New York. He was in this college between 1987 and 1989 where he graduated with an associate degree.

Jeff went to further his studies at the New York University between 1989 and 1991. He graduated with a Bachelor’s degree of Arts in broadcast journalism.

He was also a judge representing Kenya at the new East Africa’s Got Talent show on 4th August 2019.

Koinange is a man of means. he is among the highest paid media personalities in Kenya. According to a local newspaper, Jeff’s salary is Ksh. 2 million per month.

Jeff wrote this book so that through his African eyes, generations could understand the role played by journalists in covering different aspects of society.